Comrade Raghunath Singh is CPI(M) Candidate for Anandpur Sahib Lok Sabha Constituency , Punjab. He hails from a communist family. His father Comrade Rulia Ram alias Adhial was associated with the communist movement since 1938 and was jailed for participating in the Independence struggle, struggle against Rajwara Shahi ( Feudalism ) in the post independence era and in 1949 for launching a struggle against Water Tax.

Comrade Raghunath Singh passed Matric from his village school in 1971. He was twice expelled from the school for playing a role in organizing a strike against fee hike. His family had to face boycott many times for having relations with the Dalit families and visiting their houses. In 1972 he joined Naujawan Sabha Punjab. In 1973 he went to Burail Jail for three months along with Comrade Harkishan Singh Surjeet when a Jail Bharo Morcha was launched against price rise. He was again sent to Patiala Jail for 3 months during the same agitation. In 1974 he started working on the SFI Front and played major role in the Bus Fare Hike agitation. In 1975 he joined BAM Khalsa College, Garhshanker. In 1978 he completed his B. A. Degree. In 1979 he was arrested on the allegation of instigating Police Strike along with Comrade Darshan Singh Mattu and many senior Party leaders. In 1979 he joined Govt. College Hoshiarpur in M.A. (English ). But due to agitations he dropped his studies midway. Then he became a whole timer on SFI Front and was elected General Secretary of Hoshiarur District Unit of SFI. He became Cashier of Punjab Unit. In 1983 he joined Trade Union Front and started working in CITU as a whole timer. He became of Joint Secretary of Punjab CITU, and Working Committee Member of All India CITU. In 2003 he was elected General Secretary of Punjab CITU and in the same year he was elected Vice President of All India CITU. He is holding both the posts till now.

Comrade Raghunath Singh became a District Committee Member of Hoshiarpur District Committee of CPI(M)  in the year 1978. He was elected to the State Committee in 1988. He became a State Secretariat Member in 1998 and continues to be in that post . Comrade Singh has been fighting for the rights of the working class and his victory will ensure that a pro worker voice reaches Parliament. 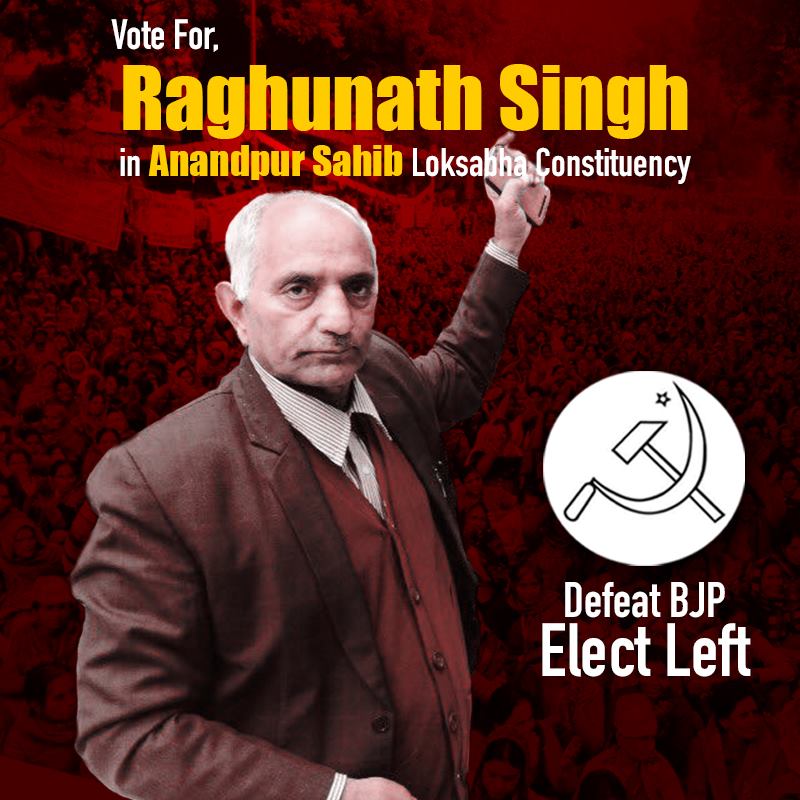