Com S Varalaxmi is a well known militant leader of the toiling masses of Karnataka. She caught the imagination of the Karnataka and even the country in March 2017, when under her leadership over 20 thousand Anganwadi workers occupied the road for 4 days and nights leading to the Vidhana Soudha, seat of power in Karnataka.  She pioneered the State-wide organisation of  Anganwadi and other scheme (Mid Day Meal and ASHA) workers, and bringing their demands to the centre stage. She is currently President of the State  Unit of CITU and Member of State Committee of the CPI(M).  She was earlier General Secretary of Karnataka CITU. She is contesting from Chikkaballapur LS Constituency of Karnataka as CPI(M) candidate. She is also the first woman candidate from any national party, to contest in this LS constituency (carved out in 1977)

Com S Varalaxmi hails from a poor family of a backward community in a village in undivided Kolar District (current Chikkaballapura District was part of it). Her family moved to Kumbalagodu on the outskirts of Bangalore, in search of livelihood. She completed her HS education and joined a factory as a worker in 1989, simultaneously pursuing her college studies in the evening. As a worker she came into contact with CITU, and organised union in her factory and spread her activities to neighbouring factories as a CITU activist.  In the struggle in another factory in 1993 was not only brutally attacked by police, but was also jailed. On return from jail she had to face serious social problems.  Undeterred she continued her union organising resulting in her dismissal from her factory in 1994. She joined CITU as a full time activist. Here started a saga of strenuous organising work, militant struggles and inspiring leadership. Though as a woman TU activist she had to face many serious risks and challenges, she remained determined.

She also participated in the militant long drawn struggle in Velliappa Textiles in which workers were fired upon and 35 criminal cases were hoisted on activists including Com Varalaxmi. It was only withdrawn only when a Judicial Enquiry report indicted police action.  She also participated militant BPL struggle. She had to face brutal attacks, underground life and imprisonment in these struggles.

She was elected to Gram Panchayat in 1994. She has been a member of CPI(M) State Committee since 1998 and Secretariat Member since 2012.  She has participated in many  peoples struggles in the constituency like implementation of Perennial Irrigation Project based on Dr Paramashivayya Committee, issues of handloom workers and silk producers. She had to face brunt of brutal lathi charge while participating in the siege of Udupi Krishna Mutt opposing its obnoxious practices of Madesnana (Shudras rolling over left overs of Brahmins feasting) and Panktibedha (of Caste discrimination in Temple feast). 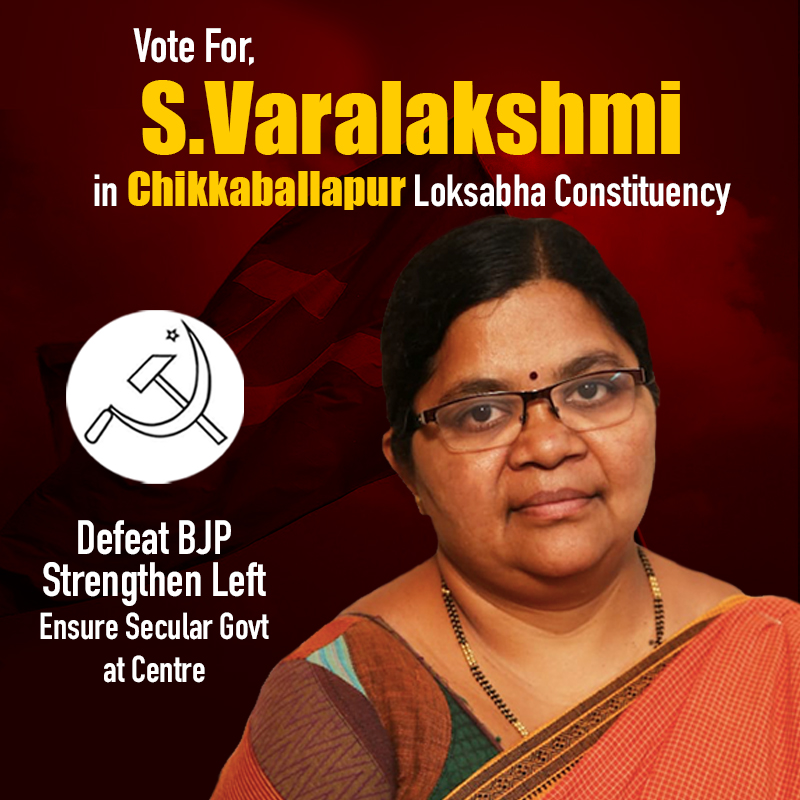