Veena George was a renowned journalist before she entered politics. After completing M.Sc. in Physics and having secured a B.Ed. degree, she worked as a college teacher. She left the job to become a prominent media personality. She was the first woman to become the Executive Editor of a Malayalam news channel.

She was elected to the Kerala Legislative Assembly from the Aranmula constituency in 2016. She is also a member of the CPI(M)’s Pathanamthitta Area Committee.

As an MLA, Veena George played a major role in the effort to rejuvenate Varattar, a tributary of the Pamba river, which was on the verge of death. She and the late KK Ramachandran (who was the MLA of Chengannur) worked together in a mass effort with the involvement of MNREGS workers, Kudumbashree activists, students, local self-government institutions and others to bring the 13 km-long river back into life. The revival of Varattar became the inspiration for many other projects to revive dying rivers and streams in Kerala.

Veena George won widespread popular acclaim with her exemplary work as part of the rescue and relief operations during the Kerala Floods of 2018. She worked tirelessly with the rescue teams, and when a crisis arose due to scarcity of food, she ensured food for nearly 2000 families by starting a community kitchen. She formulated post-flood rehabilitation work in her constituency by taking into account the needs of all sections of people.

The Aranmula Heritage Project was another major task she undertook. A detailed plan was prepared with the help of experts, and work was started to ensure the survival of traditional industries such as the manufacturing of the famous Aranmula mirror and for protecting the heritage of the region.

Ancient terracotta figurines unearthed by the floods prompted Veena to take the lead in setting up the Pampa Valley Civilisation Study and Research Centre with the involvement of the Archeology Department, historian MR Raghava Varier and others. The project was turned into a people's effort by involving experts and interested persons from the region. Subsequent excavations based on their proposal has resulted in the discovery of about 400 sculptures and more than 1500 artefacts. Work for a historical museum has started.

Veena's efforts in ensuring houses for those without homes has also drawn much praise. Development of infrastructure and facilities worth Rs. 800 crore, including roads, bridges, upgradation of schools, the Pathanamthitta stadium, upgradation of primary health centres and hospitals, cath lab at the Pathanamthitta General Hospital, and drinking water projects are at various stages of execution in her Assembly constituency.

Veena George has proved her mettle as a people's representative with the creativity and vision to formulate and execute plans that serve people's needs and aspirations.

The crowds thronging her campaign meetings in all parts of the constituency suggest that Veena George is on course to a historic win in Pathanamthitta. 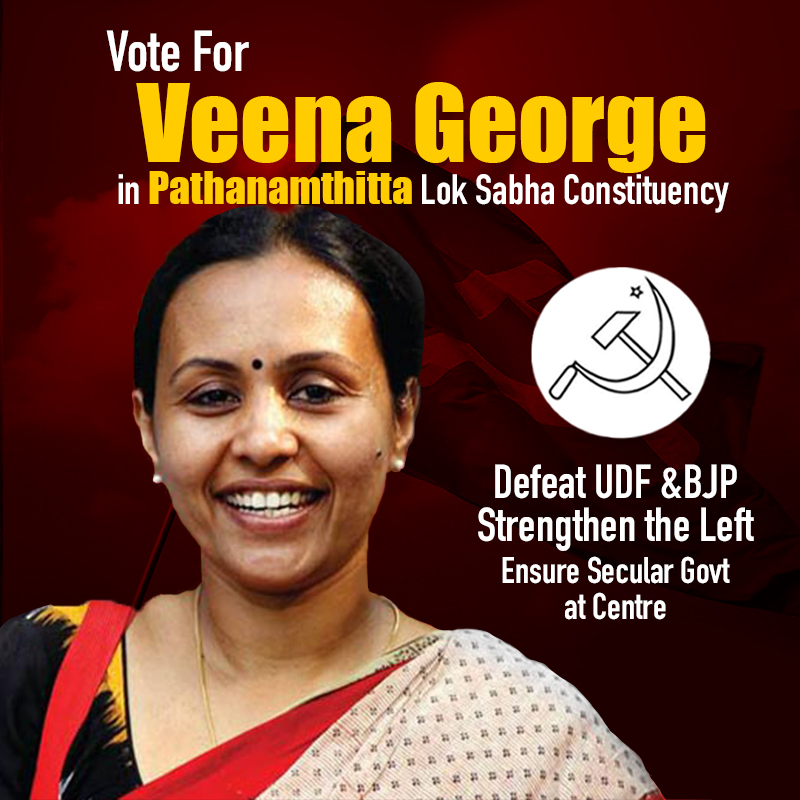